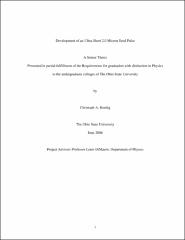 One of the exciting advances in ultra-fast optics is the development of a new amplifier architecture known as Optical Parametric Chirped Pulse Amplification (OPCPA). This new mode of amplifying light pulses is unique since it makes amplification of light pulses at arbitrary frequencies possible. In the laboratory of Dr. Louis DiMauro a project is underway to develop an OPCPA based laser system that operates at a wavelength of 2.0 microns, which lies in the mid-infrared part of the electromagnetic spectrum. The system will be the first operational OPCPA at this wavelength. An important part of this project is the development of an ultra-short seed pulse at this wavelength. This pulse will provide the signal, which will be amplified by the OPCPA system. Since no active gain medium exists, that can actively produce ultra short pulses at 2.0 microns; non-linear optics must be employed to convert light from a more conventional and well developed ultra-short laser source. Titanium doped sapphire is a lasing medium that supports large a spectral bandwidth. Titanium sapphire (Ti:S) allows for the generation of extremely short pulses ranging down to 6 femtoseconds (6.0 x 10-15 seconds). The difference in frequencies at the ends of the spectrum of a short Ti:S pulse can lie in the mid-infrared. By using a material with a sufficient nonlinear optical response it is possible to couple the components in the spectral ends of the pulse to produce an ultrashort mid-infrared pulse. We report progress in developing a Ti:S laser oscillator operating at a bandwidth of 70nm and computational simulations for the generation of light pulses at 4.0 microns. This development will aid in assessing the feasibility of utilizing this technique for the generation of the OPCPA seed pulse.