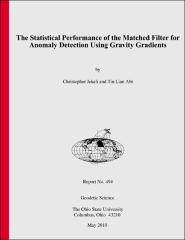 This document first reviews the theory of detecting a subsurface linear anomaly using the matched filter applied to observations of the gravitational gradient in the presence of a nominal gravitational background field and along tracks crossing the anomaly orthogonally or at an arbitrary angle. The maximum filter output indicates the likely location along the track and, with appropriate statistical assumptions on the background field and measurement noise, it also serves as a test statistic in the probabilistic evaluation of the filter’s performance. Different setups of the Neyman-Pearson statistical hypothesis test yield calculated probabilities of either a miss or a false alarm, respectively. The needed statistics of the maximum filter output are properly obtained using the distribution of order statistics. Through Monte Carlo simulations, we analyzed the ability of the matched filter to identify certain signals in typically correlated gravity fields using observations of elements of the gravity gradient tensor. We also evaluated the reliability of the hypothesis testing and of the associated calculated probabilities of misses and false alarms. We found that the hypothesis test that yields the probability of a miss is more robust than the one for the probability of a false alarm. Moreover, the probability of a miss is somewhat less than the probability of a false alarm under otherwise equal circumstances. Our simulations and statistical analyses confirm that the power of the tests increases as the signal strength increases and as more gradient tensor components per observation point are included. Finally, we found that the statistical methods apply only to single tracks (one-dimensional matched filter) and that the matched filter itself performs poorly for multiple parallel tracks (two-dimensional formulation) crossing a linear anomaly obliquely. Therefore, these methods are most useful, with respect to both the detection and the probability calculation, for single tracks of data crossing a linear anomaly (at arbitrary angle).