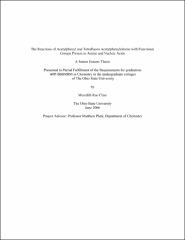 Photoaffinity labeling (PAL) is a technique used to discover points of contact between protein and nucleic acid complexes. Learning which amino acid residue is proximal to which nucleic acid residue is crucial to understanding the structure and function of the complex. In the PAL experiment a photosensitive molecule, typically an azide (N3) group, is appended to a nucleic acid or amino acid residue of the complex. In a successful experiment photolysis of the azide releases a singlet nitrene which can lead to a robust cross-link. Unfortunately, the PAL experiment is often plagued by low cross-linking efficiency. There is an urgent need to develop new azide probes which lead to highly efficient cross-linking. During 2004-2006 the chemistry of para-azido acetophenone (4H) was studied in organic and aqueous solutions. Through laser flash photolysis (LFP) and time-resolved infra red spectroscopy (TRIR) it was found that the main reactive intermediate produced was triplet nitrene. It was later determined that the reason 4H forms mostly triplet nitrene is that when in aqueous solution, water catalyzes intersystem crossing (ISC) which is a fast transfer from the singlet nitrene to the triplet nitrene. The 4H compound reacts best with reducing agents such as sodium ascorbate, methionine, and glutathione. In organic solvents the singlet nitrene forms a ketenimine which reacts with phenol and N-methylimidazole. Since neither the organic or aqueous reactions form a reactive singlet nitrene it was concluded that the 4H compound is not a useful reagent for PAL experiments. It was hypothesized that the addition of four fluorine substituents to the aromatic ring would enhance the bimolecular reactivity of para-acetylphenylnitrene and that this would increase the efficiency of cross-linking. The new molecule 2,3,5,6-tetrafluoro para-azide acetophenone (4F) was also studied using LFP and TRIR techniques. It was found that in an aqueous environment 4F does not form a reactive singlet nitrene that can be intercepted, but in an organic environment it was found that the singlet nitrene has a long enough lifetime to react with pyridine to form an ylide which can be detected by LFP and TRIR methods. The 4F compound was also found to react with the unactivated CH bonds in cyclohexane to form an adduct which is evidence that it can form a successful crosslink. Based on the findings of this research it can be concluded that the 4H compound will not form a successful crosslink in either a hydrophobic or hydrophilic region of a protein or nucleic acid. The 4F compound would not be useful in a hydrophilic region, but it could be used successfully as a probe in a hydrophobic region where it has been found to form crosslinks with other molecules.