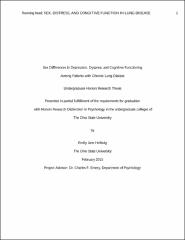 Chronic obstructive pulmonary disease (COPD) and idiopathic pulmonary fibrosis (IPF) account for more than 200,000 American deaths each year, and are debilitating and costly conditions. Dyspnea, the subjective symptom of breathlessness, is the most common physical symptom among lung disease patients. These patients are also likely to experience depressive symptoms as well as cognitive impairment. Although the rate of chronic lung disease incidence is similar in men and women, relatively few studies have examined sex differences in psychological functioning of patients with pulmonary disease, and no prior study has explored sex differences in both COPD and IPF patients. Therefore, this study utilized archival data to investigate sex differences in the relationship between psychological and cognitive functioning among men (n = 21) and women (n = 10) diagnosed with COPD or IPF. At a routine clinic visit, participants completed self-report measures of distress and tests of cognitive and pulmonary function. Pearson correlations evaluated relationships among measures of cognitive function, psychological well-being, and pulmonary functioning. Analysis of variance evaluated sex differences on all outcome measures. Results indicated no sex difference in levels of depression or dyspnea; and depression was more highly correlated with dyspnea in men than in women. In a subgroup of participants matched on ventilatory impairment, women demonstrated better cognitive performance than men, but among both men and women, better quality of life was associated with enhanced cognitive functioning. The study was limited by small sample size, which reduced statistical power. However, results indicated that women with lung disease exhibited fewer symptoms of distress and better cognitive functioning than men. In addition, dyspnea appears to be more relevant for distress among men than among women. Thus, sex differences may be important to consider in evaluating and treating symptoms exhibited by patients with chronic lung disease.