Interview of Rita A. Horner by Brian Shoemaker 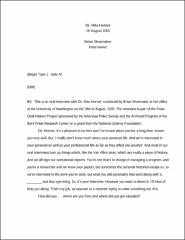 Dr. Horner describes her educational history, including a bachelor’s degree from the University of Wisconsin and a Master’s degree from the University of Minnesota, both in botany. During her graduate work, Dr. Horner spent time at Friday Harbor, which was a series of summer classes involving marine algae. After graduation, Dr. Horner was hired by George Anderson in the Zoology Department at the School of Oceanography in Seattle, doing research on the marine environment. During this time, Dr. Horner’s research focused on productivity and marine phytoplankton. While working at the School of Oceanography, Dr. Horner participated in her first oceanographic cruise on the Brown Bear (1960). She goes on to discuss this cruise in detail. After several years, Dr. Horner was hired at the Yakima Valley Community College in Yakima, Washington, where she taught general biology and oceanography. She later applied for a Fulbright grant fellowship (1963-64) and got it, which led her to travel to University of Oslo, Norway. While in Norway, Dr. Horner studied taxonomy of marine phytoplankton. Upon her return from Norway, Dr. Horner returned to the University of Washington as Richard Norris’ graduate student. In 1965, Dr. Horner became one of the first woman to conduct research in the Arctic (Point Barrow), funded by the Arctic Institute of North America. She goes on to describe her time at Point Barrow, including her living quarters, lab, and flight. In February of 1969, Dr. Horner received her doctorate and got a job at the University of Alaska. After a few years, she moved to Fairbanks and took a position as an Assistant Professor at the Institute of Marine Science. In 1972, Dr. Horner became the first woman to do research at Prudhoe Bay and one of three women to do research on T-3. She also was the first woman to go out on a modern Coast Guard icebreaker in the summer of 1973, collecting phytoplankton on the Beaufort Sea. She discusses the reaction of the scientists’ wives to her trip. In the fall of 1974 Dr. Horner resigned her job at the University of Alaska and became involved in the Outer Continental Shelf Environment Assessment Program (OCSEAP) in Washington. She discusses the struggle that she and other women had to go through in order to gain access to research vessels and stations. She also describes her interaction with the various Coast Guard ship crews and her fellow scientists. Dr. Horner spends a good portion of the interview discussing her research directly, including ice algae, primary productivity and biomass chlorophyll. She also dealt with zooplankton. She discusses her time as Chief Scientist aboard the Polar Sea and the Glacier. Beginning in 1981, Dr. Horner started work on algobloom (commonly known as “red tide”). In 1983, she went on her first (and only) research cruise to the Antarctic aboard the Surveyor. While there, she worked on acoustic surveys of krill. Since the completion of her Arctic and Antarctic work in the mid-80s, Dr. Horner has been focusing her research on algobloom biology in Puget Sound and Hood Canal, along with five other sites on the coast. She discusses her part in the Scientific Committee on Oceanographic Research and the Gordon Research Conference in the spring of 1996. The Gordon conferences continue today and include scientists from Russia, Norway, the United States, Canada, Japan, and Germany. Dr. Horner was awarded the Chairman’s Award for Polar Science along with Willy Weeks while attending the 1996 conference. Major Topics The Friday Harbor program Productivity and marine phytoplankton Dr. Horner’s role as one of the first woman to do research at Point Barrow, Prudhoe Bay, T-3 and the Beaufort Sea Outer Continental Shelf Environment Assessment Program (OCSEAP) United States Coast Guard ships the Glacier and the Polar Sea Ice algae, biomass chlorophyll, and zooplankton Acoustic surveys of krill The Gordon Research conferences