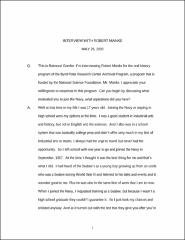 Robert Manke enjoyed industrial arts and history in high school. After completing his junior year in 1957, he enlisted in the Navy and was assigned to a Seabee unit. After completing military school, he was sent to Midway Island to help with base maintenance. After eight months, he was accepted in the Antarctica program. The training at Daisville, R.I., included both physical and mental conditioning. In addition, he earned a GED diploma. After arriving at McMurdo Sound, Manke went to Little America 5 to take equipment to the Byrd Station. He spent fourteen months at the Byrd Station. His main duties included maintenance of heaters, snow melters, and buildings. All supplies were parachuted in from airplanes. During the winter, the base had ten Navy personnel and a civilian scientist. At the beginning of the winter, there was approximately ten feet of snow on the roofs of the buildings and twenty feet at the start of summer. Manke did not observe serious tensions among the personnel. A HAM radio was used to communicate with home. After leaving the Navy in 1962, he married his girlfriend and has worked in the maintenance departments of large corporations. Manke has many pleasant memories of Antarctica. The cook sponsored special parties for the small group. He describes some of the social activities which took place there. Major Topics Seabees and their roles on Midway Island and in Antarctica Maintenance of Byrd Station in Antarctica Airdropping of supplies Communication in Antarctica Wintering over at Byrd Station