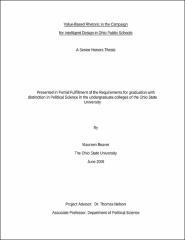 This project analyzes the rhetoric of an issue that has excited considerable governmental, media, and public interest in Ohio: the teaching of neo-creationist ideas (Intelligent Design) in the public schools. The project has broader significance as well, as this controversy is not isolated to Ohio- it has waxed and waned in many states since the early 20th century, and has gained momentum in recent years. More broadly still, this project can deepen our understanding of the importance of social values for political influence, public opinion, and public policy. In recent years, social research has highlighted and clarified how social values supply the foundation for citizens’ political attitudes. This point is not lost on experts and political professionals; George W. Bush's victory in the 2004 presidential election stimulated a national discussion of the importance of “moral values” in political life. With respect to existing scholarship, this project is poised to bring together two important literatures: the study of persuasive political communication, and the study of "issue framing.” Several important questions have emerged from these literatures, and provide guidance to this project: • How do political communicators make explicit linkages between values and social policy in the minds of the general public? For example, in what ways do opponents of Intelligent Design link the importance of separation of church and state to the inclusion of Intelligent Design in Ohio’s science curriculum? • What kinds of rhetorical tactics do communicators use to create favorable public conceptions of complex issues like the inclusion of Intelligent Design in Ohio’s public school curricula? • How do communicators, and the public, resolve the inevitable value conflicts that generate public controversy? For instance, in the case of intelligent design, how does the public negotiate the conflict between the values of church-state separation and free speech?