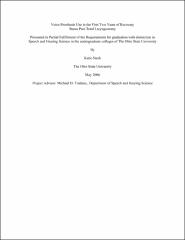 Advanced laryngeal cancer requires laryngeal amputation (laryngectomy) (Graham, 1997). As a sequelae to laryngectomy, the surgeon redirects the trachea to the external neck, creating a tracheostoma. This serves as the path for respiration as there is no longer a connection between the trachea and the upper airway (Plante & Beeson, 1999). The laryngectomy deprives the patient of the power source (exhaled air) for speech and the vibrating source (vocal folds) for speech. There are three forms of voice restoration following total laryngectomy: esophageal speech, speech with an artificial larynx, and tracheoesophageal (TE) speech, requiring use of a voice prosthesis (v.p.). TE speech is the focus of the present study. Voice prostheses have evolved immensely since their introduction in1980; therefore, clinicians face a multitude of decisions in managing speech rehabilitation. Questions arise regarding which v.p. design is “best” and what criteria should be considered when selecting v.p.s. This study is a chart review of 11 patients with total laryngectomy and primary TEP who have been in recovery for two years (time frame, 2003-2005). The goal was to identify changes in selected v.p.s and reasons for such changes in the first and second years post-surgery. The primary trend was that patients required progressively shorter v.p.s in the first year vs. negligible change in the second year. A second trend was that clinician-inserted v.p.s tended toward a relatively short useful life. A third trend was that more female laryngectomees were retained in the second year of recovery than males. A fourth trend was the pervasive presence of candida colonization of v.p.s (a condition producing breakdown of the v.p. valve.