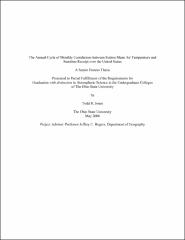 The strong positive relationship between global air temperature measurements and solar irradiance values has been recognized by multiple researchers, and some have also noted the near 1-to-1 relationship between solar irradiance and sunshine duration measurements. This investigation applies these findings by combining the two relationships in order to understand links between average monthly air temperatures and average monthly sunshine duration as a percentage of maximum possible using weather station data from 113 sites across the United States. The monthly time scale data produce clear annual cycles in linear correlation values that vary in both sign and magnitude throughout the year, generally having large positive correlations in the summer and relatively large negative correlations in the winter months. Also, distinct spatial patterns of correlation variability within these annual cycles have been observed by using principal component analysis. Three clearly different regional correlation patterns were found; the largest encompasses the northeast, the Midwest, and the northern Great Plains; another lies directly to the south along the mid-Atlantic coast, extending inland to the Mississippi; and a third lies along the Gulf Coast. In addition, it was found that the relationship between air temperature and sunshine duration may be quadratic rather than linear. These regional patterns may have some application in aspects of applied meteorology and atmospheric science research in the areas of forecasting and atmospheric modeling, as well as in the understanding of how temperatures in specific regions will respond in light of global brightening.