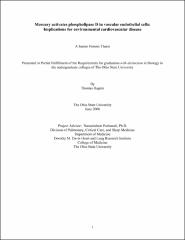 Currently, mercury has been identified as a risk factor of cardiovascular diseases among humans. Here, we have hypothesized that mercury modulates the activity of the endothelial lipid signaling enzyme phospholipase D (PLD), which is an important player in the endothelial cell (EC) barrier functions. In order to test the hypothesis, monolayers of bovine pulmonary artery ECs (BPAECs) in culture, following labeling of membrane phospholipids with [32P], were exposed to mercuric chloride (inorganic form), methylmercury chloride (environmental), and thimerosal (pharmaceutical), and the formation of phosphatidylbutanol as an index of PLD activity was determined by thin-layer chromatography and liquid scintillation counting. All three forms of mercury significantly activated PLD in BPAECs in a dose-dependent (0-50 micromolar) and time-dependent (0-60 min) fashion. Metal chelators significantly attenuated mercury-induced PLD activation in BPAECs, suggesting that cellular mercury-ligand interaction(s) is required for the enzyme activation and that chelators are suitable blockers for mercury-induced PLD activation in ECs. Sulfhydryl (thiol-protective) agents and antioxidants also significantly attenuated the mercury-induced PLD activation in BPAECs, suggesting that the cellular thiols are probable targets for mercury action and that reactive oxygen species (ROS) play a role in mercury-induced PLD activation in ECs. Increases in ROS generation were observed in BPAECs following the exposure of cells to methylmercury that was attenuated by antioxidants; this confirmed the involvement of ROS/oxidative stress in the mercury-induced PLD activation in BPAECs. For the first time, the results of this study revealed that mercury induced the activation of PLD in the vascular ECs wherein cellular thiols and ROS acted as signal mediators for the enzyme activation. The results suggest further that PLD signaling may play an important role in mercury-induced endothelial dysfunctions and cardiovascular diseases.