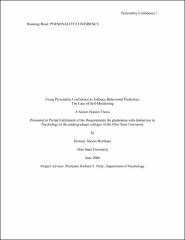 Prior research on thought certainty has shown that thoughts held with greater certainty better predict judgments, and prior work on attitude certainty has shown that attitudes held with greater certainty are more strongly correlated with behavioral intentions than attitudes held with low certainty. The present research examines the effect of certainty on personality variables, specifically self-monitoring. One hundred and five undergraduate students designed their own advertisements for a consumer product and completed the self-monitoring scale and indicated their confidence in their responses to the scale. Replicating previous research, as self-monitoring increased so did the emphasis on image in the advertisements they created. Importantly, this pattern was stronger as confidence in one’s self-monitoring responses increased.