Use of Landfill Leachate to Generate Electricity in Microbial Fuel Cells 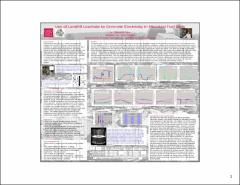 Microbial fuel cells, in which microorganisms catalyze the transfer of electrons released from the oxidation of organic compounds onto an electrode, are a promising biotechnological approach for harvesting energy in the form of electricity from certain wastes. The purpose of this study was to determine if landfill leachate is a productive source of substrate and microbes for generating electricity in microbial fuel cells. Research methods included filling the anodic chambers of multiple fuel cells with landfill leachate. The cathodic chambers were filled with a buffer solution of KH2PO4 and were separated from the anodic chambers by a proton exchange membrane (NafionTM). Graphite plates were used as the electrodes in both chambers. Findings from this study show that microorganisms in landfill leachate are electrochemically active, and thus, landfill leachate can be an effective source of bio-electricity. Further results indicate that these electricity-producing microbes reside on the graphite anode, as opposed to being suspended throughout the leachate fluid. Experiments indicated that the leachate may lack enough carbon constituents (or food sources) to support long-term electrical generation. The addition of 10 mL of a 0.4% soluble sugar mixture (0.1% each of glucose, cellobiose, maltose, and xylose) provided enough food source for the microorganisms in the leachate to generate electrical voltage that was nearly three times the amount produced without the sugar mixture (0.120 volts). Furthermore, this maximum voltage generation (0.450 volts) continued for nearly two weeks, over twice the length of generation for the leachate without sugar. Additionally, leachate Chemical Oxygen Demand (COD) levels were reduced in initial tests after fuel cell electrical generation was complete, indicating that microbial fuel cells are potentially effective in treating landfill leachate. A cost analysis of a conceptual large scale design indicated that MFC technology is not mature enough to justify the implementation of this design based on economics alone. However, as energy costs continue to rise and MFC power production is maximized, MFC implementation could become more feasible.