Effects of dietary supplementation of unsaturated fat, vitamin E, and sorbitol on the performance of dairy cows and the fatty acid concentrations in milk. 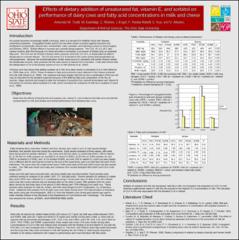 Dietary supplementation of soybean oil will increase conjugated linoleic acid (CLA) in milk but not to the extent that results from supplementing diets with fish oil. Data are limited on CLA in milk from feeding a combination of soybean and fish oils to provide different sources of fatty acids. There is some evidence that increasing dietary concentration of vitamin E may affect milk CLA when feeding unsaturated fat. Even though sorbitol is being used in commercial feed, limited published data are available as to its effects on animal performance and milk composition. Eight lactating dairy cows (4 Holstein and 4 Jersey) were used in a Latin square design. Each period consisted of 3 wk, with wk 3 being used for data analysis. Rumen samples were taken from the Holstein cows (one with rumen cannula and via stomach tube for the other 3 cows). Diets consisted of 44% forage (80% corn silage and 20% alfalfa hay), were mixed once daily as a total mixed ration (TMR), and fed twice daily. The cows were fed 4 diets: 1) control diet (CNTL; 500 IU vitamin E), 2) 2% fish oil, 0.5% soybean oil, and 500 IU of vitamin E (FSO), 3) 2% fish oil, 0.5% soybean oil, and 2000 IU of vitamin E (FSOE), and 4) 1% sorbitol (SORB, dry form; 500 IU vitamin E). Diets with oil reduced dry matter intake (DMI) (18.8 versus 22.7 kg/d), but DMI was similar between CNTL and SORB. Milk yield (31.7 kg/d) and milk urea nitrogen (MUN) (17.0 mg/dl) were similar among diets. Diets with oil reduced milk fat and protein percentages (3.87, 2.50, 2.58, and 3.96%; and 3.38, 3.09, 3.16, and 3.32% for CNTL, FSO, FSOE, and SORB, respectively). Body weight and rumen volatile fatty acids (VFA) were similar among diets. Concentrations of vaccenic acid (3.49, 8.03, 11.8, and 1.96% of fatty acids, respectively) and CLA (0.63, 1.28, 2.00, and 0.39%, respectively) in milk were increased with the diets containing oil; concentrations of vaccenic acid tended to be higher and CLA was higher for FSOE versus FSO. Both breeds responded similarly to the dietary treatments with respect to performance and most individual milk fatty acids. Addition of soybean and fish oils increased CLA in milk, but the higher concentration of vitamin E in combination with the oils further increased milk CLA. Feeding the sorbitol resulted in similar responses as to feeding the CNTL diet.