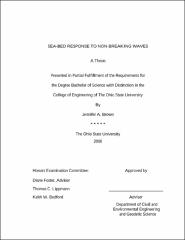 Despite decades of oceanographic research, there exists a considerable uncertainty in our ability to predict sediment transport and sea-bed geometry in response to free-surface gravity waves. The goal of the multi-institutional collaborative CROss Shore Sediment Transport Experiment (CROSSTEX) was to examine the transport of sediment onshore and offshore in the nearshore region. Observations for this research were obtained in the large scale wave flume at the O.H. Hinsdale Wave Research Laboratory located at Oregon State University in the summer of 2005. The focus of this investigation is on the bed state characteristics (ripple wavelength and height) in response to non-breaking waves. The research method consisted of measuring observations of bedform geometry with a submerged laser-video Particle Image Velocimetry (PIV) system at two water depths offshore of the wave breaking region. Ripple geometry was measured with the strong light reflection from the laser present at the bed captured by the video system. Measurements of ripple wavelength and height were obtained from the PIV images after the sea-bed had responded to the wave climates. The free stream velocity was measured with an Acoustic Doppler Velocimeter (ADV) current meter approximately 30 cm above the bed. Bed states and ripple types were classified for a range of random wave conditions, with significant wave heights ranging from 30 to 60 cm and wave periods ranging from 4 to 8 sec. Resulting geometries ranged from flat to rippled beds. Two types of ripples were considered: suborbital, defined as having ripple spacing dependent on both wave orbital diameter and sediment grain size, and anorbital, defined as having ripple wavelengths independent of wave orbital diameter. For the range of wave orbital semi-excursion amplitudes and ripple wavelengths observed, Clifton and Dingler [1984] would classify the ripple geometries as both suborbital and anorbital at both water depths. However, our results suggest the ripple geometries are purely anorbital at both water depths, and that the anorbital ripple class extends into a smaller range of wave orbital diameters than indicated, consistent with the recent findings of Crawford and Hay [2001]. Additional findings include decreasing ripple heights with increasing root-mean-square wave orbital velocity, urms. In general, no correlations were seen between the ripple geometries and wave periods. Comparisons of ripple geometry to root-mean-square wave orbital velocity, urms, and significant wave orbital semi-excursion, A, suggest that urms is a better indicator of when a flat bed will occur. These findings can be used to improve our knowledge of coastal sediment transport and sedimentary structures in the nearshore region.

The Research Experience for Undergraduates program of the National Science Foundation.