Term Limits in Review: Research and a Look Ahead 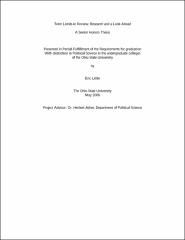 This work starts with a discussion on the history of the term limits movement. I go on to analyze the problems with term limit research. Next, I examine some of the research conducted on assessing the effects of term limits. I proceed to offer a few suggestions for future research. I argue that many of the promises of term limits have not met their initial expectations. Specifically, I dispute the idea that term limits have ushered in a new type of legislator. This analysis will be performed by comparing the Ohio General Assembly members from 1991-1992 to their 2001-2002 counterparts. Advisor: Dr. Herbert Asher