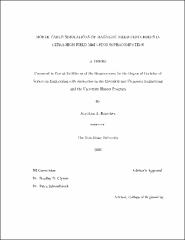 Recent research suggests that abnormal iron concentrations in certain parts of the human brain may be linked to several neurological diseases, in particular Alzheimer's disease. It is hoped that ultrahigh field MRI (background magnetic fields at or above 7 Tesla) can be used to determine the iron concentrations in various regions of the brain. Monte Carlo simulations provide theoretical data which can be compared with experimental MRI data to determine effective methods of measuring local iron concentrations in the brain. The goal of the project was to develop and implement a set of computer codes to perform the Monte Carlo simulations. The code was written in C and MPI to allow parallel-processing on supercomputers, which is advantageous due to the large size of the data. In the Monte Carlo simulation thousands of protons move randomly throughout the model and as they move they acquire phase changes which are related to changes in the local magnetic field. The brain stores iron in a roughly spherical protein called ferritin. MRI cannot directly detect ferritin in the brain but it may be possible to determine the properties and concentration of ferritin with ultrahigh field MRI. The presence of ferritin will slightly perturb the magnetic field during an MRI scan and this affects the phases of protons as they move randomly throughout the brain. It is this effect that is modeled by the simulation, which returns the theoretical accumulated phase of each proton. Another aspect is the construction of the computer model of ferritin in the brain. For our purposes we built a cube filled with spherical perturbers representing ferritin. We developed optimization methods to construct a larger and more accurate model. The code can be modified to model other brain parameters. For example, future versions can include branched cylindrical magnetic field perturbers to model blood vessels in the brain, which contain iron in deoxyhemoglobin. By tweaking the model and repeating the Monte Carlo simulations one can predict the phases acquired by the protons. This information can be compared to experimental ultrahigh field MRI data to determine a more accurate model. This could lead to a better understanding of the cause and viable treatment methods of neurological diseases such as Alzheimer's disease.

Except where otherwise noted, this item's license is described as Attribution-ShareAlike 2.5 Generic