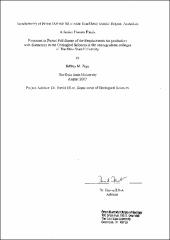 The Ferrar Large Igneous Province represents magmatism associated with the initial stages of Gondwana break-up during the Jurassic Period. The Ferrar Group crops out over 3000 km in a linear belt across the center of Antarctica, and includes the Ferrar Dolerite, Dufek intrusion, Kirkpatrick Basalt, and pyroclastic rocks. Sixteen samples from Ferrar Dolerite sills cropping out in the Shackleton Glacier region were analyzed to determine if olivine-bearing sills or sills with the highly evolved SPCT composition are present in the region. The analyses were also done to determine if there is evidence to support supra-crustal transport of the magma and to determine if the geographic pattern observed in lava compositions is also repeated in the sills. The sills were determined to have the common MFCT composition, but they do not exhibit the geographical pattern of I' 4 compositions observed in the lavas. The absence of the SPCT and olivine-bearing compositions shows such rocks are rare. No evidence to address supra-crustal transport was found. The research expands the geographic and stratigraphic coverage of the previously limited geochemical database of the sills.