Dissecting the roles of Lunatic fringe in the process of somitogenesis 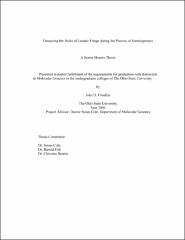 Somitogenesis is the formation of somites from the presomitic mesoderm and is a highly controlled and sequential process. Somites gives rise to the vertebrae, ribs, and skin and muscle of the back, thus regulation of this process is crucial for normal development. Recent data have suggested that a “segmentation clock” regulates the timing of somite formation. Several models suggest that transcriptional oscillation of key genes in the Notch signaling pathway is important in the clock. This study focuses on the Notch signaling pathway member Lunatic fringe (Lfng) which modifies the extracellular domain of the Notch receptor. Lfng activity is crucial for the proper development of somites as it is involved in both the clock regulation of somite formation and in the A/P patterning of the somites. Lfng is known to be expressed in two distinct regions of the presomitic mesoderm and it is the aim of this study to differentiate the roles and actions of Lfng in these processes. It is known that Lfng expression in the clock is controlled by different regulatory elements than those controlling its expression during A/P patterning. We first asked if Lfng activity plays a role in regulating its own expression by examining the expression of an Lfng/GFP reporter transgene on a Lfng null background. Expression was seen only in the anterior presomitic mesoderm where somites are being patterned in Lfng null embryos. In contrast, no expression was seen in the ‘clock’ region of the presomitic mesoderm. This supports the theory of distinct roles for Lfng in the A/P patterning of somites in the anterior presomitic mesoderm and in the segmentation clock in the more posterior presomitic mesoderm. Further, it suggests a model in which Lfng inhibition of Notch is required for its own expression in the clock. To analyze the roles Lfng plays in the clock and in A/P patterning, skeletal defects of mice were examined comparing mice that had disrupted Lfng expression in the segmentation clock only (LfngFCE1del) to those which were completely null for Lfng. We found that the skeletal defects in mice which had Lfng disrupted in the clock were less severe than those seen in mice that lacked Lfng in both the clock and A/P patterning. The intermediate phenotype of LfngFCE1del mice suggests that Lfng is important in both roles. Furthermore, the ribs of LfngFCE1del animals were more severely affected than the tails of the same animals indicating that thoracic somites are more sensitive to Notch oscillation than tail somites. Finally, in situ hybridizations are being performed to elucidate the involvement of Lfng in regulating the transcription of other Notch pathway members in the clock. Preliminary data suggests Notch1 levels are largely unaffected in the absence of Lfng in the clock. Advisor: Dr. Susan Cole