A Methodology for the Robust Procedure Development of Fillet Welds 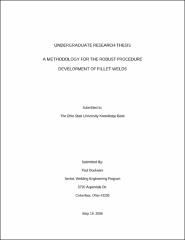 Though Gas Metal Arc Welding has been a basic component of fabrication in manufacturing over the last half-century, a standard methodology for optimizing welding procedures is lacking. A new procedure development method which minimizes trial runs, while maximizing accuracy has been recently developed by T.T. Allen, et al, in 2002. The use of the method is presently restricted to lap joint type welds. This work looked to extend this methodology to the application of fillet welds, test its effectiveness with different response variables, and study the effect of increasing the number of response variables. The development of a robust weld procedure that produces a consistent root penetration was used as the application for the developed methodology. The significance of this application lies in the fact that typical codes and standards currently give no consideration to root penetration when calculating joint strength from a lack of confidence in consistency and robustness. The benefits of incorporating penetration in strength calculations are numerous and consequential for industry. An increase in strength would result allowing welds to be made smaller, thus, resulting in decreases in weld time, filler wire used, and heat input, reducing distortion. Showing the capability of robust penetration through this statistical process procedure is the first step towards inclusion of penetration as a variable in joint strength calculations and the reaping of its benefits. Fillet welds were made on 12 mm thick A572 Grade 50 steel and cross-sectioned to allow for the critical response variables of penetration, undercut, convexity, maximum and minimum leg length, to be measured. Regression models were created along with contour plots displaying penetration and quality ratings on a plot of WFS/TS ratio versus travel speed. The optimization of travel speed against penetration and quality restrictions was also performed revealing a set of nominal procedural variables which produce sound welds for a range of noise variables. The optimized welding procedure included a travel speed of 11.3 in/min, a 1/16” arc length, a WFS/TS ratio of 28.4, and a contact-tip-to-work distance of 22 mm. The low travel speed resulted primarily from a need to maintain a minimum leg length in specification. It was also, observed from the contour plots that the robustness of the process was low from both the minimum leg length and convexity quality response factors. While the application conclusions show low robustness results, the significance of the developments with the process procedure were significant. The combination of optimization and the contour plots provides the engineer with a tool for determining the nominal input welding variables along with gaining an understanding of the robustness of the certain procedure, according to each significant quality issue. Also, the development of a rating scale based on code adds authenticity to the procedure, while at the same time increasing the ease at which the common scale is developed.