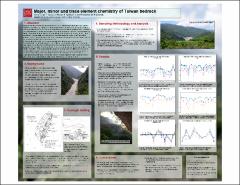 Recent sediment flux estimates have shown that rivers draining Taiwan and other high-standing oceanic islands in Austral-Asia contribute a significant fraction of the total sediment flux to the oceans. Previous studies on weathering rates on these islands of the Pacific Ocean have revealed that although the ratio of chemical to physical weathering is low, the absolute rates of chemical weathering are some of the highest observed in the world. Chemical weathering studies in watersheds from these locales have traditionally focused on the comparison of water, sediment, and rock geochemistry. However, preliminary studies in Taiwan have often been limited by a lack of sufficient bedrock geochemical data. Therefore, the determination of local bedrock geochemistry in Taiwanese watersheds is critical to achieve an understanding of these weathering processes. In April and July of 2005, a total of 22 rock samples consisting of meta-sandstones, various grades of metamorphosed shales, and mafic igneous rocks were collected in watersheds throughout Taiwan. The samples were analyzed by x-ray fluorescensce (XRF) spectrometry in order to determine their major, minor and trace element composition. Prior to analysis, the outer weathered surfaces of the samples were removed in order to achieve a true chemical composition. During sample preparation, clean room procedures were also utilized so that the samples could be analyzed for organic carbon at a future time. The rock geochemical analyses are subsequently used in conjunction with preliminary stream water data from watersheds throughout Taiwan in order to determine a relationship with a source lithology. The rock data provide an enlarged database for future comparison to stream water sediment data in order to determine relative chemical weathering intensities of the sediment.