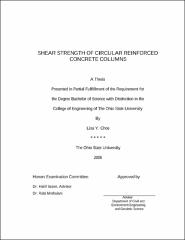 In this research, the influence of parameters on the shear strength of circular reinforced concrete columns is investigated based on the evaluation of experimental data from numerous column tests. Key parameters investigated in shear strength model are the column aspect ratio, axial load, amount of transverse reinforcement, and deformation ductility demand. An examination of existing design equations reveals wide difference in predicted response. Also, the shear strength model for rectangular reinforced concrete columns proposed by Sezen et al. (2004) is used for evaluating whether it is applicable to predict the shear strength of circular columns. The proposed shear strength equation by Sezen et al. (2004) is composed of additive contributions from concrete and transverse reinforcement, and is a function of displacement ductility. The model proposed by Sezen et al. (2004) is compared with contemporary code provisions and previously proposed models using the available column test data and is shown to result in improved accuracy.