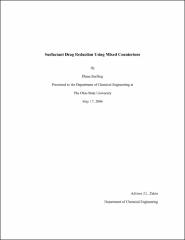 This study focused on using mixtures of counterions to improve the performance of a cationic surfactant over single counterions. The concentration of surfactant and total counterion concentration remained constant while the ratio of each counterion was varied. The cationic surfactant cetyltrimethylammonium chloride (CTAC) was tested with counterions sodium ethylbenzenesulfonate (NaEbs), sodium 3-hydroxy-2-naphthoate (SHN), and sodium salicylate (NaSal). Organic counterions stabilize threadlike micelles in surfactant solutions and enable turbulent drag reduction. Cryo-TEM imaging was used to visualize the nanostructures of our complex fluids. Counterion mixtures were tested in both water and ethylene glycol/water solutions. Certain ratios of counterions resulted in increased maximum drag reduction and effective temperature range compared with either counterion at the same total counterion concentration. The aqueous system of 75% NaSal and 25% SHN gave effective drag reduction over the entire temperature range of our testing system (2-95ºC). This surfactant system is a candidate for use in conventional aqueous district cooling and in aqueous district heating systems. Surfactant solutions with mixed counterions in 20% ethylene glycol/water showed the same pattern of behavior as in water but with less effective drag reduction. Lower effective upper temperatures and lower maximum drag reductions were found in the 20% EG/water solvent.