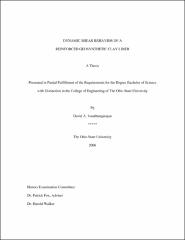 A state-of-the-art, large-scale dynamic direct shear machine has recently been constructed to measure the dynamic shear behavior of geosynthetic clay liners (GCLs). The device is capable of testing specimens measuring 305 × 1067 mm. The device has a maximum shear displacement of 254 mm, a maximum normal stress of 2,400 kPa and is capable of applying a maximum shear stress of 750 kPa. During dynamic operation, the device can sinusoidally shear a specimen to a displacement amplitude of 25 mm at a frequency of 4 Hz. The dynamic shear behavior of a needle-punched (NP) GCL was studied. To do so, a series of displacement controlled cyclic shear tests were performed on NP GCLs. A testing program was designed to investigate the fundamental dynamic shear behavior of NP GCLs and the post-cyclic static shear behavior of NP GCLs. A baseline test was first conducted at a shear displacement amplitude of 15 mm at 1 Hz for 50 cycles. In subsequent tests, shear amplitude, frequency and number of shear cycles were varied to study the effects these parameters. Based on the results of the testing program, dynamic shear behavior is governed by the performance of NP reinforcement. As large displacements are approached, additional reinforcement is tensioned and failed, reducing post-cyclic static strength. Additional reinforcement is also failed as the specimen is sheared for an increasing number of cycles. The effects of cyclic shear frequency are less evident. Additional testing is required to confirm trends in data. Testing has also shown the residual shear strength of NP GCLs is governed by the residual strength of bentonite clay.