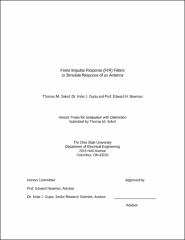 In performance analysis of radar/communications systems using computer simulations or physical wave-front generator, it is often desired to include in the simulation the response of the antenna. Incoming signals are distorted by the antenna as they are received, and therefore modeling this effect is crucial to accurate signal processing and analysis. In general, the impulse response of an antenna is not available. However, one can measure or otherwise acquire the gain and phase response of the antenna over the bandwidth of interest at several discrete frequencies. Using these discrete frequency-domain data points, one is interested in obtaining a finite-length filter to represent the antenna response. We have studied several methods using an inverse Fourier transform approach to obtain the filter coefficients. We have shown that if the bandwidth of the filter is somewhat larger than the bandwidth of the incoming signal, that various approaches involving the inverse Fourier transform to obtain the coefficients can be used. The simplest case involves taking the inverse Fourier transform of the frequency data and using the result as the filter coefficients. However, this simple approach may not create a filter that models the antenna within an acceptable error tolerance over the band of interest. The methods studied significantly improved upon the basic Fourier method for determining the filter coefficients. One approach involves windowing the coefficients to further reduce the error. The second approach studied involves windowing the frequency-domain samples. The final approach involves interpolating the data and solving for the coefficients in the least squares sense to obtain further improvements in modeling the antenna.