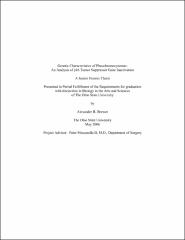 Pheochromocytoma is a rare neuroendocrine tumor histologically characterized by chromaffin tissue and is comprised of catecholamine-containing neurosecretory granules. Pheochromocytomas are primarily located in the adrenal medulla, but may also arise in the dorsal root ganglia of the sympathetic nervous system. Pheochromocytomas cause endocrine hypertension by oversecretion of catecholamines. Although pheochromocytomas are known to be associated with several hereditary syndromes, relatively little is known about other genetic abnormalities involved in their tumorigenesis. The Rb/p16 tumor-suppressive pathway is a well described component of global cell cycle regulation and inactivation may occur through alterations of Rb, CDK4, cyclin D, or p16. These alterations occur almost universally exclusively of each other, indicating that only one event is necessary for abrogation of the pathway. The p16 gene product is a 16 Kd protein that inhibits formation of cyclin D/CDK4 complexes. Consequent phosphorylation of the Rb protein results in the release of activated transcription factors and progression of the cell cycle through the G1/S checkpoint. Data regarding the role of p16 inactivation in these tumors is currently limited. The purpose of this study was to determine the frequency of p16 inactivation in pheochromocytoma specimens obtained at the time of surgical resection at The Ohio State University Medical Center. All tissue specimens were obtained from patients undergoing surgical resection of pheochromocytomas, and foci of tumor cells were identified by a pathologist under light microscopy after staining with hematoxylin and eosin. To test the described mechanisms of inactivation, the genetic status of p16 gene in pheochromocytoma specimens was analyzed. The techniques of multiplex real-time PCR, direct DNA sequencing, and methylation-specific PCR were used to evaluate tumor specimens for homozygous deletions, point mutations, and abberant methylation of 5’ CpG islands, respectively. In order to determine whether potentially inactivating alterations were associated with loss of p16 expression, immunohistochemical analysis of tissue sections was performed using p16 monoclonal antibodies.