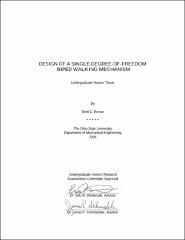 Bipedal locomotion is of unique interest due to its implications for human pathology in terms of rehabilitation and prosthetic design. Current biped robots require multiple actuators (motors) because they have multiple degrees of freedom. Furthermore, they require complex control strategies to enable stable walking. These two characteristics have resulted in biped prototypes that are complicated, expensive, heavy, and energetically inefficient. The proposed project attempts to alleviate these problems by creating a single-degree-of-freedom kinematic mechanism that coordinates all of the robot’s movement. The findings of this research outline a systematic approach for the design of a kinematic mechanism that has femur and tibia motions that represent those of a stable biped walking gait. A mechanism is designed using this approach, and optimal mechanism parameters are described. The optimized mechanism motions are then compared to those of a biped walking gait known to be stable. It is concluded that a single-degree-of-freedom mechanism is able to reasonably produce the motions of a stable biped walking gait.