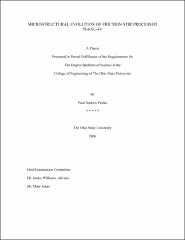 Friction stir welding has been developed over the past ten years to permit joining of high strength alloys that cannot be fusion welded. More recently friction stir processing (FSP) has been shown to alter the surface microstructure of a material by essentially in situ thermo mechanical processing. In this study we have used FSP to alter the surface microstructure of Ti-6Al-4V. In all trials, the friction stir processing (FSP) applied to the surface of cast +H.I.P. slabs has resulted in changing the coarse lamellae to small equiaxed α grains that are about 1 in diameter. This process leaves the coarse lamellar microstructure in the bulk of the material. These findings are believed to produce a microstructure that will have better fatigue strength than what was previously available from the cast + H.I.P. coarse microstructure. Orientation imaging microscopy (OIM) of the fine-grained, equiaxed process zone has shown that there is no preferred grain orientation. A new technique for locally measuring yield strength using small, in-situ compressive cylinders (pillars) has been used to determine the strength change between the fine grain and as-cast structure. Pillars made from focused ion beam milling (FIB) have demonstrated that the fine-grained stirred material is about 30% stronger than the as-cast material. Definition of the mechanism that controls the conversion from the lamellar structure to the equiaxed structure is still being developed, but several observations suggest that the -transus has not been exceeded. More work is being done to verify the fatigue strength of the new microstructure, and to develop a better understanding of the mechanism that controls the conversion process. This work is ongoing but the microstructure changes associated with FSP are described in here.