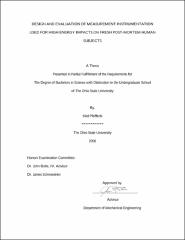 The femur injury criterion for anthropomorphic test devices (ATDs), used in car crash testing, is well established in crash biomechanics literature: however, the knee slider criterion and the tibial injury indices have less well-developed biomechanical bases. There is a need to investigate the biomechanical properties and behavior of the posterior cruciate ligament (PCL) and tibia during high energy impacts. The Ohio State University Injury Biomechanics Research Laboratory has been conducting high energy tibia impacts on fresh post-mortem human subjects (PMHS). This research project uses PMHS and focuses on the displacement of the tibia in relation to the femur while the tibia is loaded anteriorly as documented in frontal car crashes. The objective of this research is to design and evaluate a measurement system used in high energy tibia impact testing on PMHS; this system should allow for accurate measurement of PCL and tibia displacements as well as identifying the time at which injury to the specimen occurred. Since February 2005, seven PMHS (13 tibias) have been tested. A number of constraints have been placed on the test setup in order to reduce the number of test variables. These constraints include eliminating an applied tibia load, reducing the femur angle and securing the foot to the test platform. The tibia displacement is currently measured using three tri-axial accelerometers, one attached anteriorly to the femur and two attached to the tibia, anteriorly and medially. A positive comparison has been made between the relative tibia displacements recorded from accelerometers and displacements recorded from high speed video. In all tests resulting in a tibia fracture the time of failure has been clearly identified, but determining the time of failure in a test which results in a ligament injury has proven to be more difficult. With the use of the accelerometers to determine tibia displacement and suturing the DVRT to the PCL, determining the time of failure for both tibia fractures and PCL injuries has been achieved. Now that the time of injury for tibia and PCL failures can be determined and the relative tibia displacement can be accurately measured, the next step in this research is to start removing the constraints initially placed on the test setup. Removing the constraints placed on the test setup will provide a more “real world” situation allowing future researchers to obtain the biomechanical properties of the knee in a frontal car crash. Finally, the test data can be used to develop knee slider criterion and tibia displacement injury index. Advisor: John Bolte, IV, PhD