The Edgar Nelson Transeau Ohio Vegetation Survey
JavaScript is disabled for your browser. Some features of this site may not work without it. 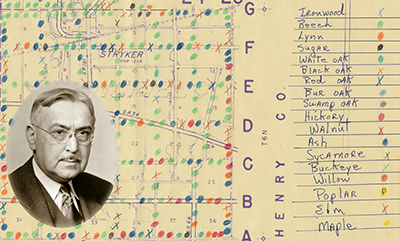 The vegetation maps in this collection were prepared under the direction of Edgar Nelson Transeau, former Professor of Botany at The Ohio State University from 1915-1946, and chair of the Botany Department for most of that time (1918-1946). The project continued early work begun by Paul Bigelow Sears, who had also arrived at OSU in 1915, but moved on to the University of Nebraska after serving in World War I. Sears studied the records made by federal land surveyors following the opening of the Northwest Territory to settlers in 1786. The surveys recorded "witness" trees, the most prominent trees at the corners of square–mile sections of the landscape. From these accounts Sears reconstructed the character of Ohio’s "virgin" forest, publishing a map in 1925. (A more complete account of the work of Professor Sears may be found in an article in The Ohio Journal of Science , by Professor Ronald L. Stuckey.)

Transeau employed a large team of students to continue the work in Ohio, and received a grant from the National Science Foundation to support the project. The students consulted county records, and added color-coded marks to regional maps indicating the "witness" trees noted in the early surveys. Some of the maps reveal the identities of these workers. One of the students, Robert B. Gordon, prepared the final map and technical bulletin after Transeau’s death in 1960 (The Natural Vegetation of Ohio in Pioneer Days, 1969.) Transeau's "The Prairie Peninsula", which is now considered a classic, credited climatic effects as the main cause of the Prairie Peninsula (Ecology. 16.3 (July 1935), pp. 423-437; OSU users may connect to http://www.jstor.org/stable/1930078.). Newer data support this concept. Transeau’s legacy was commemorated in the 1981 publication The Prairie Peninsula, in the "shadow" of Transeau: proceedings of the Sixth North American Prairie Conference, The Ohio State University, Columbus, 12-17 August 1978.

The original maps passed into the protective custody of Ronald L. Stuckey, Professor of Botany at OSU from 1965-1991. He ensured the preservation of this work for future research by donating the maps to the Rare Books and Manuscripts Library. Here they continue to provide valuable information to current scholars evaluating historical changes in Midwestern vegetation. Please see, for example, the Paleon Project at https://www3.nd.edu/~paleolab/paleonproject/.