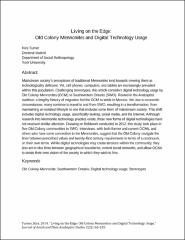 Mainstream society's perceptions of traditional Mennonites tend towards viewing them as technologically deficient. Yet, cell phones, computers, and tablets are increasingly prevalent within this population. Challenging stereotypes, this article considers digital technology usage by Old Colony Mennonites (OCM) in Southwestern Ontario (SWO). Rooted in the Anabaptist tradition, a lengthy history of migration led the OCM to settle in Mexico. Yet, due to economic circumstances, many continue to travel to and from SWO, resulting in a transformation; from maintaining an isolated lifestyle to one that includes some form of mainstream society. This shift includes digital technology usage, specifically texting, social media, and the Internet. Although research into Mennonite technology practice exists, these new forms of digital technologies have not received similar attention. Drawing on fieldwork conducted in 2012, this study took place in five Old Colony communities in SWO. Interviews, with both former and current OCMs, and others who have some connection to the Mennonites, suggest that the Old Colony navigate the lines between prescribed values and twenty-first century requirements in terms of a continuum, on their own terms. While digital technologies may create tensions within the community, they also act to blur lines between geographical boundaries, extend social networks, and allow OCMs to create their own vision of the society in which they wish to live.