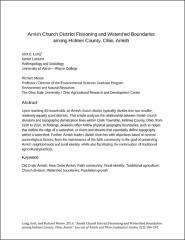 Upon reaching 40 households, an Amish church district typically divides into two smaller, relatively equally sized districts. This article analyzes the relationship between Amish church divisions and topographic demarcation lines within Clark Township, Holmes County, Ohio, from 1930 to 2010. In findings, divisions often follow physical geography boundaries, such as ridges that outline the edge of a watershed, or rivers and streams that essentially define topography within a watershed. Further, Amish leaders divide churches with objectives based on several socioreligious factors, from the maintenance of the faith community to the goal of preserving Amish neighborhoods and rural identity, while also facilitating the continuation of traditional agricultural practices.