When the Devil Knocks: The Congo Tradition and the Politics of Blackness in Twentieth-Century Panama 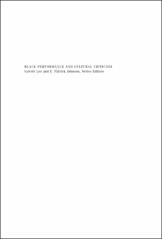 Despite its long history of encounters with colonialism, slavery, and neocolonialism, Panama continues to be an under-researched site of African Diaspora identity, culture, and performance. To address this void, Renée Alexander Craft examines an Afro-Latin Carnival performance tradition called "Congo" as it is enacted in the town of Portobelo, Panama-the nexus of trade in the Spanish colonial world. In When the Devil Knocks: The Congo Tradition and the Politics of Blackness in Twentieth-Century Panama, Alexander Craft draws on over a decade of critical ethnographic research to argue that Congo traditions tell the story of cimarronaje, charting self-liberated Africans' triumph over enslavement, their parody of the Spanish Crown and Catholic Church, their central values of communalism and self-determination, and their hard-won victories toward national inclusion and belonging. When the Devil Knocks analyzes the Congo tradition as a dynamic cultural, ritual, and identity performance that tells an important story about a Black cultural past while continuing to create itself in a Black cultural present. This book examines "Congo" within the history of twentieth century Panamanian etnia negra culture, politics, and representation, including its circulation within the political economy of contemporary tourism.