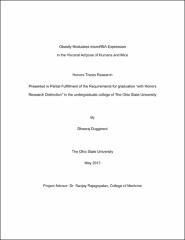 Objective: Previous studies have indicated that dysregulation of miRNAs in visceral adipose tissue of mice and omental/subcutaneous adipose tissue of humans are linked to obesity and insulin resistance. In this study, we profile the differential miRNA expression of obese IR bariatric patients and propose mechanisms of miRNA transport that may play a role in systemic inflammation/insulin resistance. Methods and Results: Whole visceral adipose tissue from lean and obese patients undergoing bariatric surgery was analyzed for miRNA expression. Four miRNAs (miR-223, miR-486, miR-15b, and miR-451) were upregulated in obese patients and found to be overexpressed in the stromal vascular fraction (SVF) of the visceral adipose tissue. The overexpression of miR-223 in the SVF was also confirmed in a mouse model. Expression of miR-223 was found to be upregulated in mouse liver tissue, but not in mouse muscle tissue, human blood monocytes, or human adipocytes. Isolation of human plasma exosomes revealed miR-223 was selectively overexpressed relative to the other three miRNAs. Conclusions: In this paper, we profile previously unreported obesity-related miRNA upregulation in the stromal vascular fraction of human visceral adipose tissue. Our results provide evidence that miRNA dysregulation during chronic obesity may play a key role in regulation of inflammation and insulin resistance of not only adipose tissue but of other tissues as well. We also show preferential enrichment of miR in the plasma exosome compartment and introduce the possibility of miRNA transport from viscera to distal metabolic organs.