Fighting for the Commons: The Case of the Women of Plachimada, India 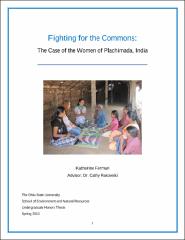 The protest campaign organized and led by the women of Plachimada in the early 2000s became a landmark event in the international water rights movement. For three years, the people of this small village in the Indian State of Kerala protested a corporate soft drink bottling plant that had been established in the village in 2000. The plant was overdrawing the village’s groundwater, causing hardship among the residents of the village. Finally, in 2003, participants were successful in their efforts, and the local panchayat (governing body) revoked the plant’s operating permit. This protest campaign drew the attention of activists, media, and researchers throughout the world, not only for its success in the defense of water rights, but also because women played a pivotal role. Although the event was well-publicized, very little research has been done regarding what has occurred in Plachimada since the revocation of the permit, the effects of this movement on the women of the village, or what lessons can be learned from the grassroots movement. The methodology for this study includes interviews with female protest participants on the ground in Plachimada, field observations of the village, and document research, to explore current sociopolitical orientations arising from the protest and to outline a more detailed chronology of protest events than has previously been offered in the published literature. Furthermore, by analyzing the case of Plachimada, it is possible to better understand the implications of this struggle for the future of women-led collective action in India, and for the broader water rights movement.