The Secret to Secret Senate Holds: Historical Analysis and Quantification of the Impact of Holds 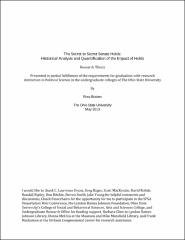 There are many forms of obstruction in the U.S. Senate, but some are less public than others. A Senate hold is an effective and critical component of Congress. A senator can place an anonymous hold on any piece of legislation or nomination before the Senate by informing their party leader. A hold will stop or kill legislation or a nomination and may be used to leverage concessions. This project examines the procedural innovation of the hold by Lyndon B. Johnson in the 1950’s. Our research has discovered that the earliest available data on the use of Senate hold is from the archive of Senate leader Lyndon Johnson, which is in contrast to the common wisdom, which states that holds began later in the 1970s. This project seeks to accomplish two goals: First, it provides additional historical information about the development of Senate holds. Second, it compares and contrasts the usage of holds and analyzes the impact. A quantitative analysis of the probability of legislative passage when the bill is subjected to a hold is examined. Holds, and how the Senate operates, is important in examining questions of fairness, efficiency and majority/minority rights.