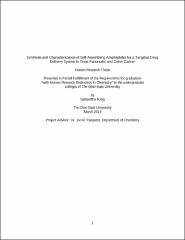 Cancer is becoming an ever-growing focus of the medical and research fields with regards to treatment and elimination. Pancreatic cancer is the fourth leading cause of death in the United States due to the difficulty in detection and treatment. The current survival rate over five years is 4%. Many possible treatments for pancreatic cancer currently exist; however, is difficult to deliver large amount of toxic cancer drugs to targeted tumor sites without significant and often deadly side effects for patients. Nanometer-scale drug delivery vehicles have proven to be one advantageous method to reduce drug toxicity. The goal of this project is to explore the use of self-assembling nanotubes based on peptide-camptothecin derivatives to allow for increased targeting of cancer cells during the course of treatment. Three compounds were formed from camptothecin, succinic acid and lysine derivatives- lysine methyl ester, lysine, lysine amide. They were tested in water and phosphate buffer solution (PBS), mimicking biological conditions, for their solubility and ability to self-assemble into specific and stable aggregates. The soluble compounds were tested and imaged for confirmation of nanostructures and identification of self-assembly process via transmission electron microscopy and circular dichroism scans. The methyl ester form (1.0) created nanotubes in water while the free acid form (2.0) and amide form (3.0) created nanotubes in PBS. The potential for a dynamic system was tested but modifications to the design must be made to take advantage of this characteristic and perfect the drug delivery system.