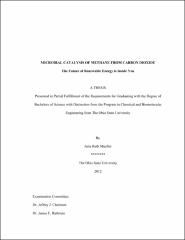 The world has energy problems, including insufficient sustainable sources, and problems associated with the waste from energy use, including emissions of greenhouse gases. The ideal solution is a sustainable energy source with no subsequent waste. As it happens, Nature has offered a means to our ideal end: microbes that can turn waste into energy. However, Nature’s solution was not custom made for the scale of humans’ problems; we cannot apply microbe-mediated waste to energy on a large enough scale to eliminate our leftovers. Thus we must apply our scientific skill to elucidate the means with which to direct microbes to create resources in tandem with our waste. The goal of this work was the production of reduced hydrocarbon fuels, specifically methane, from carbon dioxide (CO2) in a microbial fuel cell using the microbes naturally present in wastewater and to evaluate system parameters for continuous flow operation. The reaction of interest was the reduction of CO2 to CH4, performed by microbial catalysts on the cathode. The hypothesis was that if one provides electrons and CO2 then one could control methane production by promoting growth of the microbes. The approach was to build an MFC to investigate what happens with adjustments to the inputs, e.g. amount of electrons, carbon source, amount of carbon or frequency of carbon addition. The microbial catalysis of methane production would be most efficient with microbes capable of extracellular electron transfer. The specific factor to examine then was the use of hydrogen as an electron shuttle by (1) examining the relationship between methane production and the availability of electrons as hydrogen, (2) the consumption of CO2 below the hydrogen evolution point, (3) the behaviour of the microbes to lower the hydrogen evolution point and continue to preferentially produce methane or other fuels leading to methane. It was found that the microbial community naturally present in the inoculum wastewater was capable of autotrophic methanogenesis in the presence of hydrogen, homoacetogenesis in concert with the production of other VFAs and methanogenesis in response to the sufficient presence of VFAs. The change in rate of methanogenesis before and after hydrogen evolution suggests the biofilm was successfully absorbing all hydrogen shuttles or directly transferring electrons. In support of the data, the hydrogen overpotential was significantly reduced from the un-colonized overpotential but still remained above the theoretical hydrogen evolution level. The conclusion, barring further microbe analysis, was that methanogens were not forming a direct biofilm, but instead remained biofilm-associated inside the reactor volume and outside the reactor as a planktonic community in the sampling bottle. Coulombic efficiencies for mixed VFA products by autotrophic processes (including homoacetogenesis) ranged from 2% to 90% given the operating conditions. Coulombic efficiencies for methanogenesis ranged from 0% to 60% during production. Using a sequencing batch reactor method, 98% of the mixed VFA products could be converted to methane. Of particular interest was the result that the rate of methanogenesis could also be minimized using this system in a continuous flow mode by controlling the flux.

This work was funded by an award from the Lettinga Foundation

The Lettinga Foundation, Project Neptune in the EU, The Advanced Water Management Center at the University of Queensland in Australia