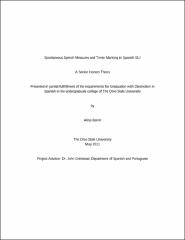 Language development is measured in various ways. Research into specific language impairment (SLI) has shown that English-speaking children have severe difficulties producing and judging the grammaticality of tense-related morphology. This has been less clear for child Spanish. Another line of research into SLI in child Spanish has shown that various measures of spontaneous language can be useful in identifying children with SLI. A classical measure, mean length of utterance (MLU), was developed in English. In spite of MLU’s utility for understanding the development of the English language in children, inconsistencies still exist in other languages. In this project, we test both the tense-marking abilities and a range of spontaneous language measures of a sample of Spanish-speaking children in Mexico City (n=55), 26 of whom are identified with SLI. The aim of this study is to determine the adaptability of MLU in order to predict morphosyntactic development in Spanish. Furthermore, the study determined that MLU can distinguish typically-developing (TD) monolingual Spanish-speaking children, from children with specific language impairment (SLI). In this study, eight different measures of language development were examined: MLU word, MLU morpheme, MLU verb phrase, number of different words (NDW), subordination index, mean length of terminable units (MLTU), grammatical errors per t-unit, and type/token ratio (TTR). All measures are statistically significant in distinguishing between TD and SLI children except for grammatical errors per t-unit, which was expected. If children with SLI can be diagnosed earlier with the help of these measures, they may benefit from early intervention and may be less likely to develop dyslexia or more severe reading difficulties.