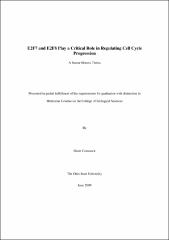 E2f7 and E2f8 are the most recently discovered members of the E2F family of transcription factors. The conventional knockout of one or the other of these genes in mice results in no observable phenotype. However, the concurrent loss of both genes results in massive apoptosis and dilation of blood vessels in the embryo and abnormal clustering of cells in the placenta, leading to embryonic lethality at day 11.5 (E11.5). This indicated that the E2F7 and E2F8 proteins are functionally redundant and critical for embryonic viability during mid-gestation. Until recently however, the tissues, cellular processes, and molecular pathways regulated by these two proteins remained unknown. Here, we show through use of a conditional knockout system, that the extra-embryonic functions of E2F7 and E2F8 are both necessary and sufficient for embryonic viability at mid-gestation. We have also defined their roles as cell cycle regulators, with their critical function lying at the G1/S transition. Finally, we have determined the molecular role of E2F7/E2F8 by investigating its activitiy as a transcriptional repressor and illuminating its interactions with E2F3a, a critical member of the E2F activator subclass. By defining the molecular functions and cellular roles of these two proteins, we may better understand the critical roles of E2Fs in cell cycle regulation and learn more about their roles in cancer development