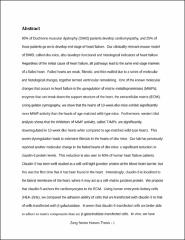 95% of Duchenne muscular dystrophy (DMD) patients develop cardiomyopathy, and 25% of those patients go on to develop end-stage of heart failure. Our clinically relevant mouse model of DMD, called dko mice, also develops functional and histological indicators of heart failure. Regardless of the initial cause of heart failure, all pathways lead to the same end-stage markers of a failed heart. Failed hearts are weak, fibrotic, and thin-walled due to a series of molecular and histological changes, together termed ventricular remodeling. One of the known molecular changes that occurs in heart failure is the upregulation of matrix-metalloproteinases (MMPs), enzymes that can break down the support structure of the heart, the extracellular matrix (ECM). Using gelatin zymography, we show that the hearts of 10-week dko mice exhibit significantly more MMP activity than the hearts of age-matched wild-type mice. Furthermore, western blot analysis shows that the inhibitors of MMP activity, called TIMPs, are significantly downregulated in 10-week dko hearts when compared to age-matched wild-type hearts. This severe dysregulation leads to extensive fibrosis in the hearts of dko mice. Our lab has previously reported another molecular change in the failed hearts of dko mice: a significant reduction in claudin-5 protein levels. This reduction is also seen in 60% of human heart failure patients. Claudin-5 has been well-studied as a cell-cell tight junction protein at the blood-brain barrier, but this was the first time that it had been found in the heart. Interestingly, claudin-5 is localized to the lateral membrane of the heart, where it may act as a cell-matrix junction protein. We propose that claudin-5 anchors the cardiomyocytes to the ECM. Using human embryonic kidney cells (HEK-293s), we compared the adhesion ability of cells that are transfected with claudin-5 to that of cells transfected with β-galactosidase. It seems that claudin-5-transfected cells are better able to adhere to matrix components than are β-galactosidase-transfected cells. In vivo, we have established timelines of claudin-5 reduction and MMP upregulation in dko hearts. We believe that these molecular changes are early steps in the remodeling process that leads to end-stage heart failure. Through our studies, we are creating a fuller picture of the changes that lead to end-stage heart failure. Our model also offers the ability to study heart failure in DMD pathology. Understanding heart failure will lead to novel treatments for this disease that affects over 5 million Americans.

The Office of Undergraduate Research
The Muscular Dystrophy Association