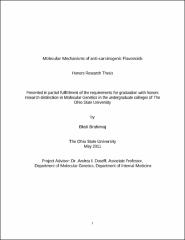 Plant-derived agents, such as flavonoids, have been known to possess beneficial health properties. One such flavonoid, apigenin has been shown to scavenge free radicals as well as posses anti-inflammatory, antioxidant and anti-carcinogenic properties. We previously showed that apigenin inhibits the production of proinflammatory cytokines by down-modulating the transcriptional activity of NF-B in stimulated monocytes and in a mouse model of acute inflammation. However, the molecular mechanism of apigenin action and its cellular targets remain unknown. Studies in our lab using a phage-display with next-generation sequencing identified targets of apigenin. Interestingly, some of these targets are involved in mRNA metabolism. To further investigate the interactions of flavonoids with its targets we developed a biosensor based on fluorescence resonance energy transfer (FRET). By measuring the change in ratio of energy transfer between the two fluorescence proteins the interaction of apigenin and targets were quantified. Expression of the apigenin target in lung cancer cell lines showed no transcriptional down-regulation or decrease in protein expression in response to apigenin treatment. Finally migration assays were used to look at the potential of apigenin to decrease the ability of lung cancer cells to migrate, drawing possible links between the apigenin-target interaction and anti-metastatic mechanisms. Our study shows that apigenin does not affect the expression of its target protein however leads to a reduction in migration of lung cancer cells. Studying the interaction between flavonoids and their targets is pivotal in design of novel therapeutics for cancer.

This work was supported by National Institutes of Health (NIH)/National Heart, Lung, and Blood Institute (NHLBI) R01HL075040-01 to A.I.D