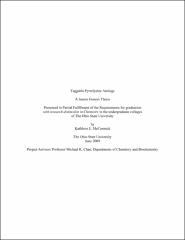 N6-(1,3-dioxolancarbonyl)lysine was synthesized and incorporated into full-length mCherry and alpha synuclein proteins by reading through a UAG codon. Mass spectrometry analysis confirmed that the analog incoporates into alpha synuclein in the acetal form. Two additional pyrrolysine analogs, N6-(2-oxo-2H-chromene-3-oyl)lysine trifluoroacetate and N6-(aminoxyacetoyl)lysine ditrifluoroacetate, were synthesized but neither compound reads throuh the UAG codon.