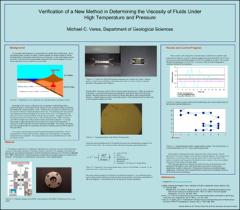 At convergent plate boundaries, where plate subduction occurs, volcanism is witnessed above the subducting plate. Hydrous minerals carried to depths of 100 km break down and release their stored water into overlying rock. As this water migrates toward the surface, mantle rock melts and also rises to the surface. This magma is seen as volcanic arcs on the surface. Viscosity measurements are important in the investigation of fluid transport. Previous measurements of water viscosity have been constrained to surface or near surface conditions. The dehydration reactions occur under much higher temperatures and pressures than those found on the surface. Prior to determining viscosity at these high pressures and temperatures (approximately 1300 K and 5 GPa), the method must be validated on fluids having well known viscosities. This is done by calculating the viscosity of water under conditions in which it is already well known (1 atm and 25º C). The hydrothermal diamond cell will be used in the high pressure and temperature experiments. The geometry of the hydrothermal diamond cell must also be reproduced when the method is tested. This geometry can be simply reproduced. Two glass slides were clamped together with a rhenium gasket between the slides. The gasket will be the same type as the one used in the hydrothermal diamond cell. Water with suspended particles was contained within a central gap within. Particle motion was monitored for preferential motion, in order to confirm accurate results. Particles in water exhibit random motions, called Brownian motion. These motions are completely random and by recording their motion, the viscosity of the water can be determined. Care must be taken when choosing the particles to track. Particles in close proximity to each other or to the surface of the gasket do not move randomly due to interactions. Digital recordings are then made of the 3 mm suspended particles. Using mean square displacement, the viscosity can then be calculated from the data.