The Geochemistry of Stream Sediments, Chagres River, Panama: Weathering in a Tropical Watershed 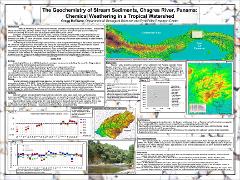 Chemical weathering of the earth’s surface is a primary process controlling landscape and soil development as well as the geochemistry of natural waters. In addition, chemical weathering of silicate minerals, which consumes atmospheric CO2, is a major control of long term climate variation. Although much has been published related to the rates and intensities of chemical weathering, very little data exist on chemical weathering in mountainous tropical regions. The Chagres River is considered Panama’s most important river with a total runoff of 4.4x105 m3 per year during years of higher flow. The highest areas of the watershed rise to elevations of 275m. The high rainfall, warm temperatures (mean annual T° of ~19°C) and steep topography all increase rates of chemical weathering in the watershed relative to more temperate locations. In this study I will analyze a series of stream sediment samples from the Chagres River with the purpose of establishing the intensity of chemical weathering in this environment. These samples will be analyzed for both major and trace element composition and compared to the geochemistry of the surrounding bedrock lithologies as well as the upper continental crustal average where data are available. The data from these Panamanian sediments will be compared to other high rainfall mountainous regions in more temperate climates, such as Taiwan and New Zealand, to determine the relative intensity of weathering within the Chagres basin. In addition to the sediment samples analyzed by me, I have compiled and interpreted a set of river samples that have been analyzed for dissolved silica (Si) by Dr. Lyons’ group at The Byrd Polar Research Center. Si is a major dissolved component of the chemical weathering of silicate minerals. The dissolved Si data will be normalized to chloride (Cl) in order to account for rainwater input, evaporation and evapo-transpiration so that the spatial locations of enhanced weathering (i.e. Si increase in the stream water) can be detected. These data are used to better confine the lithologic sources of more concentrated silicate mineral weathering within the watershed.