Economic geography and the role of socio-natural subjectivity in capitalism: The development of fracking wastewater disposal wells in Ohio 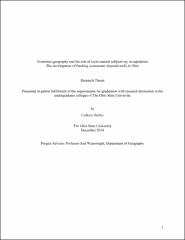 Through horizontal fracturing (or ‘fracking’), the extraction of previously inaccessible reserves of petroleum and natural gas is transforming the United States’ economic and geopolitical position. Fracking produces large volumes of wastewater as a byproduct and the disposal of this waste is mostly achieved via injection wells becoming a lucrative market in itself. To accommodate the intense growth of the fracking industry, Ohio developed a comparatively large injection well disposal infrastructure and consequently became the fracking wastewater receptacle state. This development resulted from specific economic geographic context aggregated from the combination of historical, social, political, and economic legacies in Ohio as well as comparative legal frameworks of environmental protections and regulations surrounding the oil and gas industry. In this study I interpret these legacies as a means to understand the function of socio-natural subjectivity. I argue that the socio-natural subject is integral to the existence of capitalism and has continually been reproduced and interpellated into the ideology of surplus accumulation throughout history. The culmination of the social and economic legacies of socio-natural subjectivity pre-determine and facilitate Ohio’s being the regions fracking wastewater disposal state. Working from an understanding of the socio-natural relationship that the subjects of capital have with the Earth, I develop a theory for the production and agency of the socio-natural subject of capital today as seen through the vertical territorial expansion of capital via fracking and injection well development and growth. This growth is at once driven by economic imperative while also laden with narratives of American sovereignty and security on a global geopolitical scale within carbon energy markets