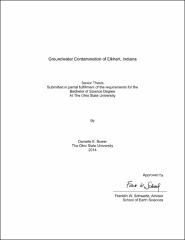 This study compiled evidence on what caused the groundwater in Elkhart to become contaminated, did the contaminants cause any health problems, and how the contamination sites are being remediated. Elkhart is located in a glaciated area of where outwash sands and gravels form a vulnerable, shallow unconfined aquifer. Five areas within Elkhart were deemed hazardous to human health and were designated as Superfund sites. Two of these are still being investigated and the other three are still being monitored even though their cleanup is complete. Much of the contamination is caused by three contaminants, trichloroethylene, 1,1,1-trichloroethane, as well as other volatile organic compounds. These materials were used as metal degreasers and disposed of in a careless manner. These families of contaminants have adverse side effects when inhaled which is a problem that could develop due to vapor intrusions into buildings. The health effects are still being studied, especially related to the ingestion of the contaminants in the water. Carbon filters have been installed, connections have been made to the city water system and sub-slab mitigation systems have been installed to make sure the people of Elkhart did not consume or inhale these contaminants.