A geochemical evaluation of water quality along the course of the Huron River, Northern Ohio 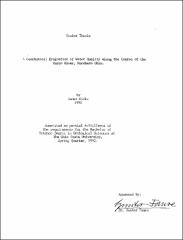 The principal source of water in the Huron River is groundwater. However, other water types also enter the river at various localities along the course of the river. The water in the Huron River consists of a mixture of two groundwater components as well as waters from other sources whose entry into the river changes the chemical composition of the water of the Huron River along its course. Mixing and dilution occur along the entire course of the river. Initially the two groundwater components mix to form water reflecting both components. In addition, various contaminants enter the river and mix with the pristine water already in the river channel. Meteoric water serves as a diluting agent which decreases the concentrations of the elements dissolved in the water. Contaminants enter the river in the form of sewage effluent and industrial waste discharged either directly or via tributary streams. How and to what extent these influxes of water affect the chemical composition of the river can be determined through the interpretation of chemical analyses of water along the river's course. By treating the water as a series of mixtures, we can determine the natural composition of the water without the effects of contamination.