Microstructural analysis of polydeformed schists from the Southern margin of the Pan-African Zambezi Belt, Africa 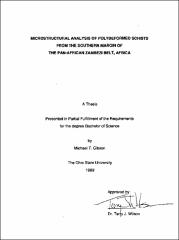 The Late Proterozoic, east-west trending Pan-African Zambezi belt in south-central Africa crosscuts the Middle Proterozoic, northeast trending Irumide orogenic belt. The southern Zambezi/Irumide margin contains Irumide 'basement complex' that was remobilized during Zambezi orogenesis. Schist units along the Ngonga River, Zambia, displayed no mesoscopic evidence of an older fabric to suggest that they were in fact remobilized 'basement complex', whereas one of the same lithologic units exposed along the Mutama River just to the east, did display an older, northeast trending structural fabric that had been overprinted by the east-west Zambezi fabrics. Microstructural analysis of the Ngonga samples of presumed Irumide age, however, did reveal evidence of an earlier, pre-Zambezi, tectonic fabric preserved within pre-Zambezi garnet porphyroblasts. The assignment of the schists to older 'basement' and younger 'cover' was thus established by this study. Detailed analysis of the timing of metamorphic mineral growth relative to the sequential stages of Zambezi deformation that affected both remobilized 'basement' and the 'cover' metasediments, was used to determine the progression of pressure and temperature conditions during deformation. These data were then used to develop a tectonic model for the southern margin of the Zambezi belt.