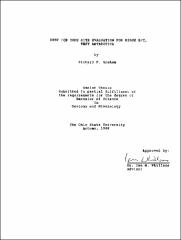 An understanding of the nature and extent of changes of the West Antarctic ice sheet are important in establishing its stability to past and future changes in climate and sea level. Two competing views of its past thickness and present overall stability exist. One view, championed Denton and Hughes, maintains that the ice surface was up 1600 m thicker at -18,000 years and that the ice sheet is presently undergoing a complete collapse. Drewry and Robin disagree, instead they suggest that a relatively stable ice sheet that has been modified by a moderate surface lowering of at most 600 m is a more appropriate view. The approach used in this study was to apply a physically based kinematic flow model of ice to the two competing theories and predict likely core stratigraphy. This thesis tests whether a program of ice coring atop an inter-stream ridge (specifically ridge B/C) could discriminate between such ice sheet models. The results of modeling past ice flow to the small dome on ridge B/C (Siple Coast, West Antarctica) indicates that a properly designed ice core program could resolve changes in ice thickness since -18,000 years. Such a core could, in addition, discern changes in the ice divide position related to the emplacement of the ice dome.