Differentiation mechanisms in a calc-alkaline lava series from the island of Aegina, Aegean Sea, Greece 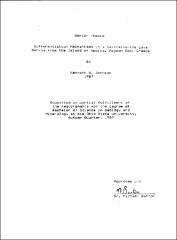 Major and trace element and isotopic modelling was performed on four representative lava samples from the island of Aegina, Aegean Sea, using data obtained from Barton et al. (1985). Aegina is situated on the western-most end of the Hellenic volcanic arc, in which one continental plate is being subducted beneath another. Major oxide variations suggest differentiation largely via fractional crystallization, and mixing models support this theory. 87Sr/86Sr behavior lends evidence to the probability of assimilation, most prominent in the early stages of differentiation. Failure to predict the effects of combined assimilation and fractional crystallization suggests the use of inaccurate values of Sr (ppm) and 87Sr/86Sr for the crust. However, the results presented provide useful information for the interpretation of destructional plate environments.